When robots rule the world…

Not long after inventing the wheel man has had an increasing fascination for passing on our menial laborious tasks to anyone or thing other than ourselves. Once slavery was abolished through society in the early millennia attentions were turned to develop mechanical solutions instead. Man tried to play God.

To some degree man succeeded. By creating complex mechanisms and systems capable of performing repetitive arduous tasks; from the first water pumps, the first locomotive and in today’s vast technologically glorious world just about everything.

The last year has seen robots being engineered that can help teach children who have suffered from brain damage to walk again, the KASPAR Robot W/RoboSkin teaches autistic kids interaction, we’ve seen prototypes teach children in schools (in fact this blog caught my eye; Will teachers be replaced by computers?) and at Cambridge University they have developed a machine that can analyse millions of papers in an infinitely shorter period of time than any human can ever expect to achieve.

But where will it stop? Developing technology to aid us in our daily work seems a fantastic idea, but how long before we are entirely replaced by a robotic army?

Somewhere in the US robots have been created to be self-sufficient. Powered by microbial fuel cells, they are programmed with a survival instinct which pre-programs them to prey on all sorts of creepy crawlies and small rodents which they then digest to provide themselves with power.

A group of robotics researchers across Europe are working on a project to ascertain whether humanoid bots are able to interact with groups of people in a realistic, anthropomorphic way. They’ve built algorithms that will enable the bots to mimic human actions and emotions. Think about that for a second; if that works we are talking about human looking robots that have adept social skills. Can you imagine them in a room deciphering a conversation from all the background noise and music?

And if that wasn’t enough the future science historians themselves have marked the beginning of the 21st century for the era when robots will take their place beside human scientists.

It’s all quite mind-boggling when you think about it. I remember watching ‘I Robot’ when it came out (admittedly mainly for the Mr Smith eye candy) but realistically, a human and humanoid mixed world could be just around the corner… 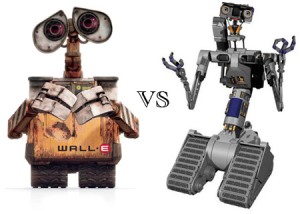 One thought on “When robots rule the world…”